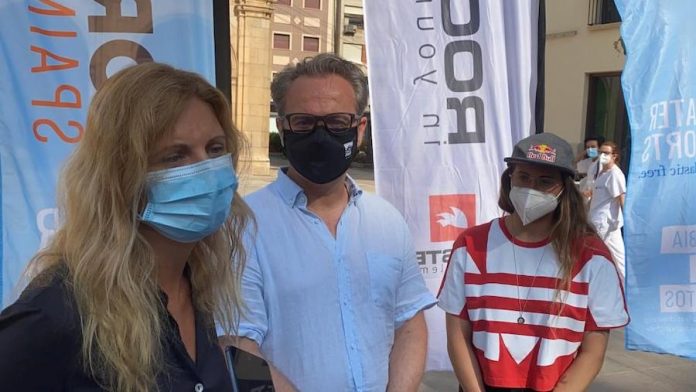 The mayor of Castelló, Amparo Marco, was the guest on the Onda Vasca radio program, Itsas Tantak.

The politician talked about his city and its relationship with the sea in the episode with its director, Eduardo Araujo, and the General Director of the Formula Kite Spain Series (FKSS), Sergio W. Smit.

The interview took place just a few days after the Formula Kite Spain Series stopped in the capital of Castellón for its second appointment of the 2020 season. The race, despite the haste with which it was organized, was a great sporting and organizational success. And a good part of that good result was in the perfect harmony that took place between the City Council led by Marco and the organization of the event. And, undoubtedly, by the involvement of the mayor of Castelló.

Among the actions that were favored by the direct management of Amparo Marco was the talk offered on the beach of the Gurugu for all athletes and fans of water sports in Castellón and the FKSS, led by the Water Sports Plastic Free Foundation. The event was attended by Enrico Grassi, owner of the Chiringuito Sole, and Alexis de Pablo, director of the Hotel del Golf Playa Castellón, two great connoisseurs of the coasts of their city and who have implemented actions in their respective businesses in favour of sustainability and respect for the marine environment. Also present at the educational talk were Marta Sánchez Roca and Alejandro Climent, ambassadors of the Foundation and current Spanish champions of Formula Kite, an Olympic discipline for the upcoming Paris 2024 games.

The mayor of Castelló said during the talk: "We are trying to open up to the sea. The City Council wants Castelló to stop living with its back to the sea, which is synonymous with development and the future. It is the City Council's commitment to strongly embrace science and the sea. For this reason we have made sea baptisms for the children of Castelló so that they know what the Mediterranean is, sail and learn about water sports".

Marco was not only politically involved in the regatta but on Sunday, the second day of competition, he was on the Gurugu beach in the morning to learn more about the sport: "It was a pleasure for me to be there and spend a morning with the FKSS family. I want to thank the FKSS for their effort in making this race that puts us on the world map to show Castelló as the perfect destination for sport and leisure".

Sergio W. Smit highlighted "the effort of Castelló not only to sport but also to nautical tourism to continue progressing in demonstrating that everything around the sea has enormous potential. Castelló is being an example. I would like to emphasize that Amparo was with us all Sunday morning, she didn't come to have her photo taken, but to live the competition, watching everything that was happening in how an event of these characteristics was mounted. I would like to emphasize this because you help a lot -I personally told the mayor- with your proactivity to make Castelló look at the sea again. It is invaluable", said the head of the FKSS.

The mayor appealed to sport as a tool to energize and promote the city: "This is one of the aspects that since we started we had very clear with all the sports team of the City Council. And with people like Sergio Smith, who brings us a championship like the FKSS, and who puts us in the spotlight with a competition of 50 sailors from nine different countries. Sometimes we forget that we have been a real nautical power and we have to encourage that".

"Two things must be valued in this competition, firstly the security that has been with the Coronavirus. The word security has come to stay and it is fundamental. The beaches of Castelló allow us to do so because they are wide and long and we can maintain that security. And the other thing is sustainability, respect for the environment. When you go to the beach you have to take care of it and pick up what you find. Take care of our values and protect them. This competition also had this sustainability event with a talk to participants about what pollution is and what it means," said Marco.

The director of the FKSS reaffirmed this: "Adding sustainability to the actions is fundamental. A badly ordered industry only generates noise in the destinations. Castelló has a great opportunity to look at the sea again, he can turn it into a brand identity, something that few can achieve now. In sustainability I want to emphasize the commitment of the City Council that is demonstrated with facts. In a talk between her and me in two seconds we generated a parallel event and that could be done because there was a lot of synergy between the two parties with common interests. And Smit concluded: "You can count on us for whatever you want because you will always have us by your side".