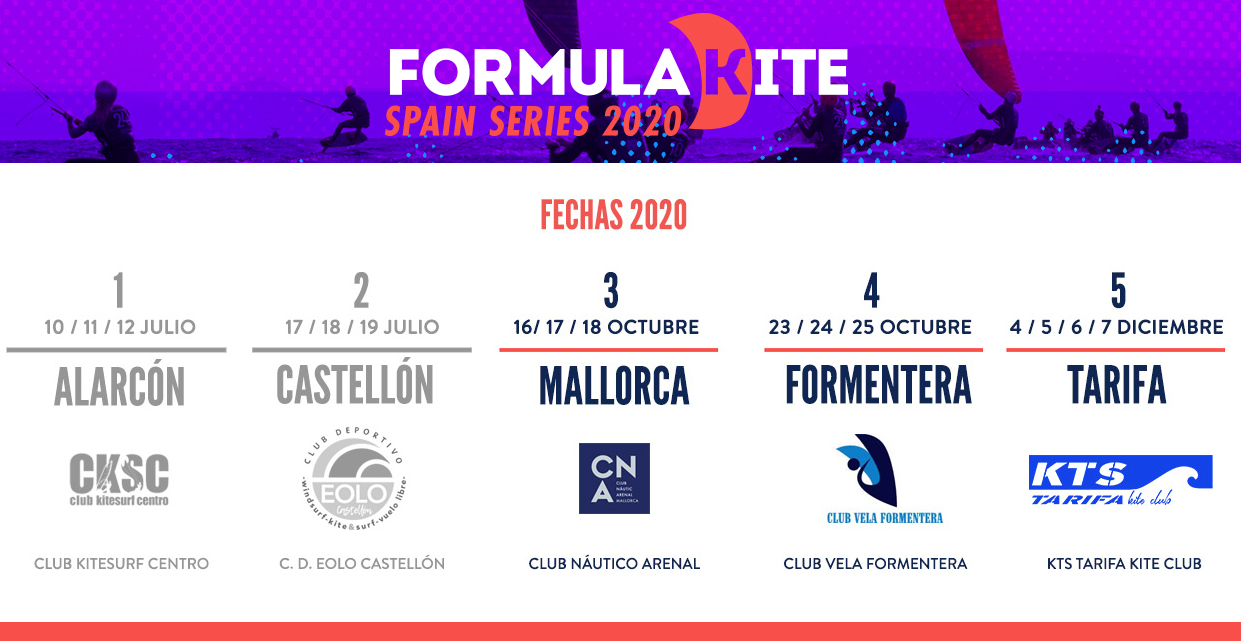 The next two races of the FKSS 2020 will be held in the waters off Mallorca and Formentera in mid-October.

The first of the races will be held from October 16th to 18th in the waters of the Bay of Palma with the Arenal Yacht Club as the venue. One week later, from 23rd to 25th October, the competition, which is the only circuit in Europe for Olympic classes, will move for the first time to Formentera with the collaboration of the Club Vela Formentera. The Balearic Islands take over from the Formula Kite Spain Series 2020.

Since the Formula Kite Spain Series (FKSS) we have been looking for the same formula that was successful in the first two competitions of the season in Alarcón and Castelló. Given the logistical problems that we find in 2020 with the pandemic of Covid-19 the organization, after the good reception of the sailors in the first two appointments, has wanted to do the two races in a row to take better advantage of travel to the islands.

Hondarribia is not celebrated

On the other hand, the presence of the FKSS in Hondarribia has been ruled out for this season after the race that was due to take place in March was previously postponed. Despite the fact that both the race organisers and the Hondarribia Yacht Club have tried to carry out the regatta, in the end the event will not be held on Basque soil.

The Formula Kite Spain Series once again calls for safety. The announcement of the calendar in which the Balearic Islands take the baton is always made with the utmost caution in terms of medical safety for the sailors and members of the organization. The first two races of the season were an example of good behaviour and respect for current health standards. And it is hoped that in October it will be possible to return to the water with the same safety measures that have already been taken in Alarcón and Castellón.

Sergio W. Smit, General Director of the Formula Kite Spain Series, says about the Balearic Islands, they take over from the FKSS: "After the fantastic support we received from the sailors and destinations in the first two stops, our goal has been focused on being able to make the next stops a reality. We have managed to coordinate two consecutive 'Back to Back' events, which were so well received in Valverde del Júcar and Castellón, but this time uniting two of the Balearic Islands as incredible as Mallorca and Formentera. We will continue to work hard to get these two important races for the Formula Kite Spain Series celebrated".

Ferrán Muniesa, director of the Club Náutico Arenal, explains: "As we said when we postponed the April race, our priority as a club is to try to put the races that were suspended at the beginning of the pandemic back on the calendar, always within the maximum responsibility. To be able to celebrate the Formula Kite Spain Series in Mallorca in October is very good news for us. Our desire is to return to normal as soon as possible and that in Mallorca we recover the tourist and sporting pulse that has always characterized us. The synergy that has occurred with the test of Formentera to be in two consecutive weeks I think is very positive for everyone.

Asier Fernandez, technical director of the Club Vela Formentera, says: "From the Club Vela Formentera we are very excited to bring back to Formentera a national competition of an Olympic discipline such as Formula Kite. Never before has been held on the island of Formentera a national event of Olympic character, we hope to be at the height as a venue for the competition. We know that the island is a perfect setting for this type of event, and especially for the practice of kitesurfing, which makes it much easier for us to take the event forward along with the Formula Kite Spain Series.

And Fernandez points out: "On the other hand, this is the first time in 16 years that we have a Sports Councillor and an Environment Councillor who have believed in this sport, and are doing their best to promote this sport on the island, and to make this event go well. From the Club Vela Formentera, we want to thank these two 'consellers' who have been key to applying for permits for the event, and the foundation WATER SPORTS PLASTIC FREE for all the help they are offering us so that all the athletes who attend can enjoy the island and the event. Hopefully this will be the first of many kite events on the island.